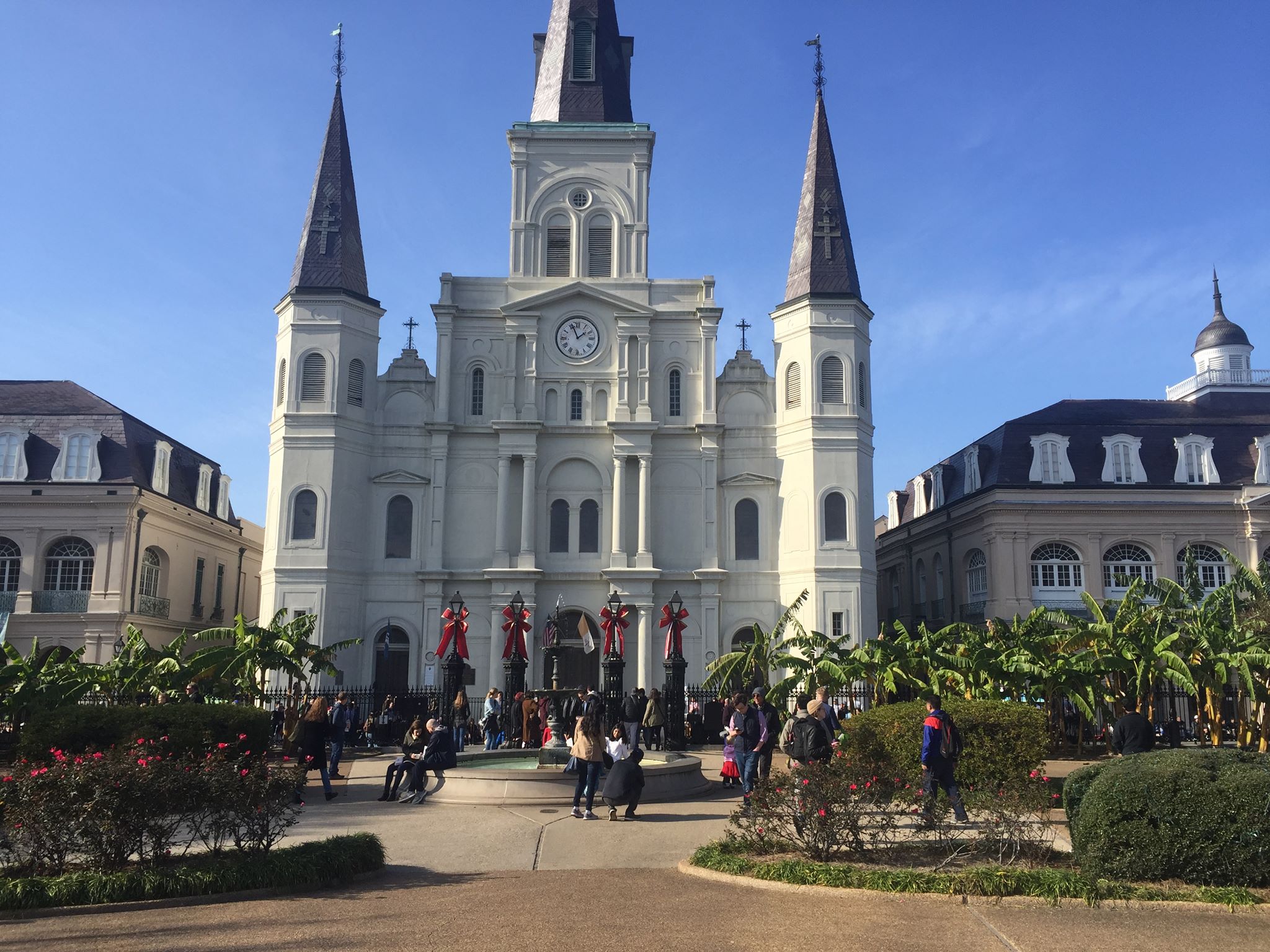 How long you can stay in New Orleans depends on how much you can drink, eat, and listen to jazz. That’s the reason why people come here. Actually local legend says that New Orleans is the birthplace for jazz as a musical genre, formed from an amazing mix of African motifs, European music and hard life.

The city itself is pretty small, on the banks of the Mississippi river and still has a big and important port. In previous times the city served as the largest market of slaves in the South after Europeans, mostly French, turned the surrounding swamp areas into a sugar cane plantation. This actually began the destruction of the local ecosystem. As part of America the destruction continued including the building of a canal from the Gulf of Mexico to save 40 miles of travel for cargo ships which flooded the area with salt water. So now, from time to time, when a powerful storm like Katrina comes, it leaves devastation in its wake. There are discussions about how to fix the situation and return the swamps because they are a natural barrier that protect people from the overwhelming force of hurricanes.

Even with this history, the city is a very colorful and vibrant, interesting mixes mainly Creole and African cultures in architecture and in the cuisine. People are extremely affable, polite and religious – even the administrative division in the state is not by districts (or county) but by parish.

How to get here

The airport is not large, 30 minutes from the French Quarter without traffic. Uber and Lyft have their own loading zone and are cheaper for two then regular shuttles. Plus-minus 30 dollars and you are in the center of everything.

Most things in New Orleans circulate around the French Quarter, and this is actually the best choice where to find accommodation. There or nearby are most of the hotels, hostels and Airbnb offers. You definitely will have choices, but in season (during conventions, festivals and holidays) prices rise significantly and the number of offers are reduced. On average, you can find quite decent offers for $80 per night.

There is not much to say because the main purpose is to listen to music and not only jazz. Here people stroll from club to club searching for their personal flavor of music. In the same time, you can find that music legends can unexpectedly perform anywhere. We, for example, had a chance at a Jazz Playhouse to listen to Dee Dee Bridgewater, a jazz singer who has three Grammys and a couple Tony-Awards. She was just among the audience, was recognized, despite wearing a cap, and asked to sing.

The clubs generally are small, and it looks like over the last 100 years nobody and nothing has changed here, it’s what adds a specific charm. The streets are also full of musicians for all tastes, most of them performing at a good level. You can hear some pretty unique instrument like the Gambian kora.

Most clubs are located on Bourbon and Frenchman streets. It is difficult to recommend anywhere specific.  Just stroll around, listen from the street and if you like what you hear – come in and join the crowd. There is just one obligation –  buy at least one drink. By the end of the evening with such requirements you may no longer distinguish between the quality of music.

There are also quite strange traditions in the city. For example, guys throw girls beads and girls have to show their boobs… We saw a decent scandal between a group of young guys and a man who apparently tried to defend his wife. So you can be stuck in trouble for no reason.

In the French Quarter there are also countless antique shops, galleries, cabarets, etc., so it’s also quite interesting to just wander and take a look.

In the city, of course there are museums that represent local history and art. One of the most interesting is located in the city park, which I would recommend to visit if you have time. There is also an open-air sculpture museum, an old observation train, a lake with pedal boats in the form of swans, centuries-old oaks (favorite spot for photographers), a botanical garden and an amusement park for children. You can go there are by the old tram, which is still good a city transport, the cost of such a tour is $3 for a day ticket per person from Canal Street.

For those who really want to know the city’s history which is primarily related to slavery, I would recommend downloading the New Orleans Slave Trade application. They collected interesting and important material about the period of slavery, added personal stories and outlined a map of the most prominent places. Many little known facts, such as what happened when races mixed and the emergence of “color” people who were no longer slaves, and could even be landowners are discussed in the app.

Many people want to go on an excursion to a city cemetery. It’s hard to say if it’s worth it, but if you have such a desire, I would recommend taking a tour late in the evening with stories about murder, disappearances and ghosts. The cost is $45, the details is here: https://www.hauntedhistorytours.com/

Another local entertainment is riding on an old style steamboat. Actually there are just two steamboats: on the Natchez you can simply ride the Mississippi with Jazz, and the Creole Queen will take you on a longer excursion with historical explanations and a stopover in the National Park, which was the site of the last battles for United States independence with England. Cost is $35, duration is 3 hours. There are also romantic evening tours with dinner and music. You can buy tickets in the port, or there are often discounts on Grupon.

There is Hop-on-Hop-off ($39 per day, or $49 for 2 days with extra French Quarter and Garden district walking tour) and city tours with options.

I would recommend first of all take a tour of the plantation. This is truly something unique, and yes, plantations still exist till now and form a multi-billion-dollar sugar cane business. Excursions have become an additional form of earnings for many of them. Some of them, like the Oak Plantation, have completely transformed into a museum and part of the territory is undergoing archaeological work and restoration. Some plantations are partially converted to hotels or offer houses for rent, some actually want to save history and restore justice to slaves. In any case, there are options for visiting, the stories are also different, and I would recommend visiting a few plantations (it is possible in one tour) and become educated about both the perspective of the slave owners and the horrible dark side of enslavement for greater objectivity. Truth is, as always, somewhere in the middle.

There is interesting architecture – all buildings are facing to the river, all rooms have exits on two opposite sides, and houses are always surrounded with huge porches – this all allows for natural air conditioning system in a very hot climate.

Another feature of the plantations is the oak alleys, which have not only aesthetic purpose, but also very practical value. They were a natural barrier that physically separated the Big house from other buildings, as well as the moss that grew on the oak was gathered, which was used daily to fill the mattresses, and added the cooling effects of moisture.

You have numerous plantations for excursions. Most popular is definitely Oak Alley and Whitney plantation. The first is just a romantic version from the point of view of the owners. On the second one guides will tell you opposite side of the slave history. You can book excursions at http://viator.com or https://plantationparade.com/

It is interesting also to go to the swamp tour to see the alligators – unusual landscapes, the opportunity not only to see, but also to feed the alligators, as well as get acquainted with very unique specimens of flora and fauna. There are many such tours: if you go to the swamp by yourself the cost will be $25, if you order with pick up at the hotel it is $49 (car rent can be much more convenient and cheaper option in this case). You can order tour for example here: http://www.honeyislandswamp.com/

Well, if the place surrounded by water, there is a paradise for fishermen. On the internet there are photos of happy people who caught fish of unreal sizes. So whoever likes this and ready to wake up at 5 AM can order fishing tour for example here: http://neworleansfishingtour.com/

Food in New Orleans is another local attraction and another reason why people come here. Usually the cost is average. The dishes are quite unique. A lot of sea products (again, there is a river and the Gulf of Mexico), so you can try oysters, shrimp and other sea products in variants; you should also try local red fish, there are a unique pasta and rice. Be careful – everything can be a bit spicy. Actually, here began the popularity of hot sauces such as Tabasco, which were used initially as medicine for slaves.

From good restaurants I can recommend:

Acme oyster house is a famous seafood restaurant that has been working more than 100 years. But you should know that there can be a big line to get in. Details here: https://www.acmeoyster.com/

Another well-known old and very good restaurant of Creole Cuisine is Pelican Club. https://www.pelicanclub.com/ – even off the season it is necessary to book a table in advance, otherwise it is impossible to get in.

Simpler restaurants, also old and with pretty good food, I can recommend – Governor and Curio (both located in the French Quarter). Generally speaking people in New Orleans are so passionate about food and the choice of products that will surely create something tasty and authentic.

In the average the dinner for two with one drink will cost around $60, in places like Pelican Club, almost 150 or more, but it is also worth to try, the portions are huge. We had leftovers from our dinner next two days.

In general, the city is quite suitable for jumping out for several days and breaking away with such cultural color.