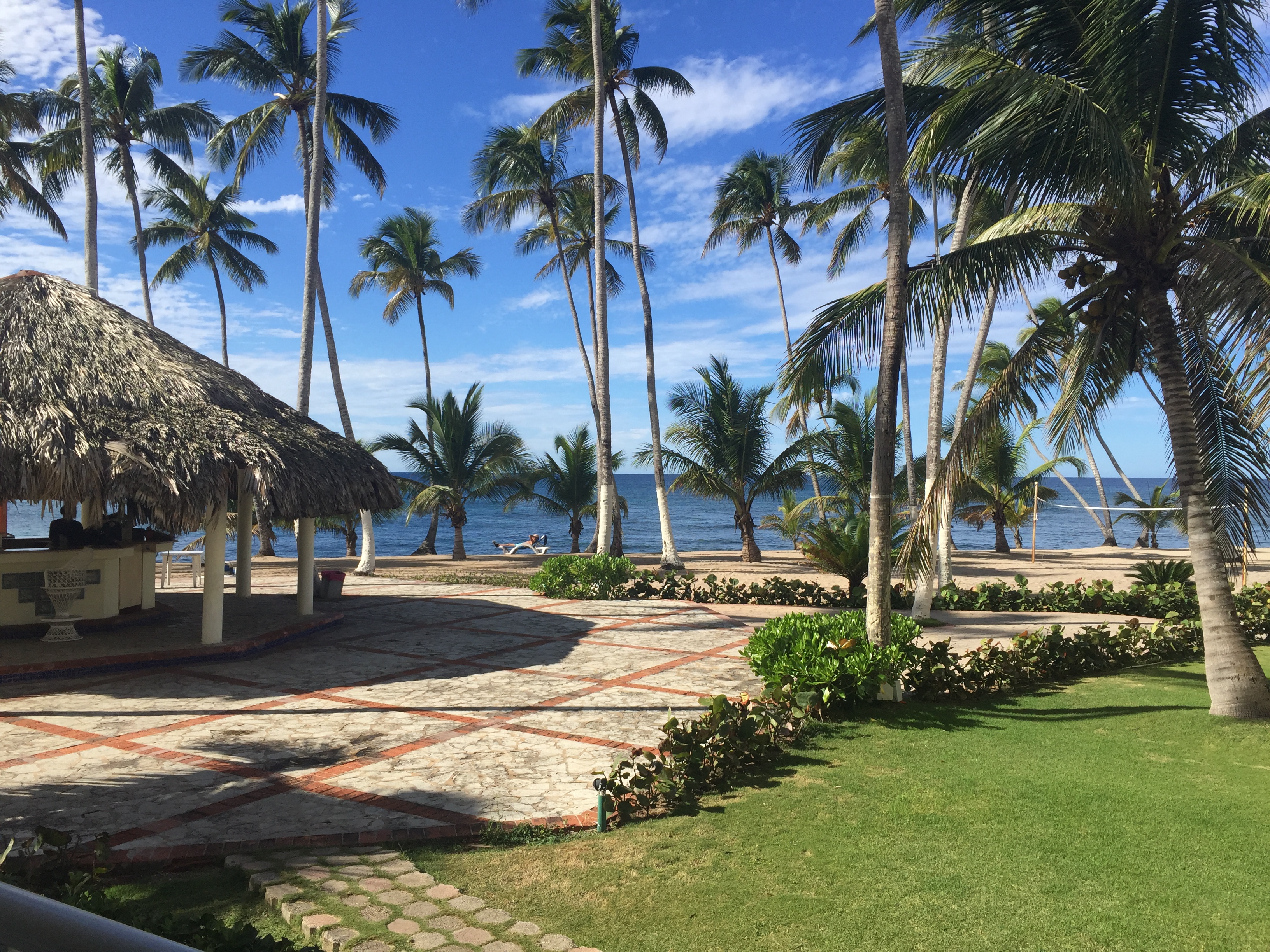 The Dominican Republic has become a pretty popular destination, but there are much more interesting places to visit and considering the cost, I would think twice before going here.

For example, all-inclusive resorts in Turkey are not only more comfortable, but also much cheaper, while Egypt will be much more exotic. And if you are going to spend some money, I would recommend Majorca. Anyway, we’re in the Dominican Republic.

How to get there

Not too safe. As we know, a low standard of living (an average salary of about $200) correlates with high crime levels.

This is the first colonial city in America. It is here Christopher Columbus came first in search of India. From here, began the colonization of the whole Latin American continent.

The city is large and contrasting with about 2 million inhabitants. Most of the city is slums, but there is a new part and a small historic center. Despite being located on the shores of the Caribbean, there is a rocky shore with deep water and no beaches.

Culture is a mix of the indigenous peoples, the African influences (the Spaniards were actively importing enslaved from Africa, because the local population was small) and, the Spaniards.

Actually, everything interesting in the city can be seen in one and half day.

The main destination is a historical part, or zona colonial.

There is a city tour, but you can order them only for two people ($50 per person), it is not an option if you alone. It coincided that the office of the tour agency was in our hotel, so there was a tour bus from our hotel which refused to take me, because I was alone. Instead, I saw a bus in the city with only two passengers in the middle. Well, that’s it. You can order, for those of you who travel with someone, here: https://www.viator.com/tours/Santo-Domingo/Santo-Domingo-Sightseeing-Tour/d5622-6973CITY

But from Punta Cana, the opposite side of the island, there is a variety of tours.

After long searches, we found the audio tour only around the historic center with the recorded audio (like in the museum). For $20, it featured several languages ​​(English, French, Spanish, Russian), headphones, and a map. The historical center is relatively small, so even with my lack of skills for maps, I found all objects. The cost includes the entrance to several museums: The Columbus House, the Royal Palace, the National Pantheon, the fortress, and the first church in America. Tours around these museums are included in the audio record. It was nice because it looked like the only way to get information about the exhibits. Audio guide did not have some of the numbered parts, but honestly there was enough information.

There is also a walking tour from the house of Columbus on Plaza Espana (Plaza Spain) starting at 10 AM. You can order it right on the spot. There is also a small excursion train from the Basilica Cathedral of Santa Maria la Menor (their main temple) with a Spanish-speaking tour and an English-speaking guide. So, there are city tours, but it took us three days to find them.

Columbus’s Lighthouse is a huge building that was proposed to be a lighthouse, but because it’s expensive they turn it on only once a year on Columbus Day. The first floor is dedicated to art, and is not too interesting. There is an exhibit from each country. Here, I learned that there was a tradition of the local tribes to give birth in the water. The rest of of the building is unknown. Interestingly, there are remnants of Christopher Columbus. Although he died in Spain, he wanted to be buried here. He was transported and had a chapel built for him. Even that locals despise him, they must keep it.

Entrance is 100 pesos, or 2 dollars. You can ask for an English speaking guide who will show you around for the tip: 30 minutes and you will see everything.

Los Tres ojos – or three eyes – park with lakes in the caves. The water in the lakes is fresh. It was previously used for bathing. One of them is called Las damas where women and children bathed because it is small and shallow. Once, it was a lake but the falling coral divided it into three parts. There are, in fact, not 3, but 4 lakes. The fourth lake people found after they adopted the name. It’s great adventure to cross to the 4th lake by a special small ferry for only $1. The entrance costs 100 pesos, but for 1200 pesos ($26) you can hire the English-speaking guide who tells you a few stories. Duration is 1 hour. You can get there only by a taxi.

Plaza de cultura – the area of ​​museums. It is not too interesting. The National Theater (El Teatro Nacional), the Museum of Contemporary Art, the Museum of History and Geography, the Natural History Museum, the Museum of Dominican People (Museo del Hombre Dominicano) and the National Library are located here.

Museo del Hombre Dominicano is a historical or archaeological museum about the history of indigenous people. It costs 100 pesos, and you can get a free audio guide.

The Museum of History is not about history, but rather flora and fauna. It’s modern, but not very interesting. It has models of animals and plants. The cost is 70 pesos.

Other museums were closed, but I think they would not be the most interesting in the world.

The botanical garden is huge and very interesting. They organize excursions on a small train every half an hour, but only if there are more than 5 people. I must say that there are not many people. There are endemics, and things from other countries such as the Japanese garden. The cost is around the same 100 pesos (2 dollars), the train – 5 pesos. There is also a museum of ecology – 70 pesos ($1.5). You can get here only by taxi.

In the book guides, it is recommended to walk around the waterfront which is George Washington Street. Honestly, there is nothing special there. Moreover, it is wrecked. When decided to walk, it caused an unhealthy excitement from the locals: people from cars shouted at me “what are you doing?”

In Santo Domingo, most of the average hotels are located either in the historic center or George Washington Street waterfront. You have to be prepared that in Sheraton, for example, light may disappear for a while. They give you $5 credit for lunch every day, if you do not change towels. Hotels are combined with casinos, of which there are many. Service is generally good and people are very nice.

About beach holiday – below.

In general, food is delicious and portions are huge. There are interesting restaurants with local cuisine and dancing. There are few things to know: the tips are already included in the bill, the prices on the menu are indicated without a tax. In order to get the final value, you need to increase the price by 28% (10% tip and 18% tax).

From restaurants, I would recommend a few:

Restorante el Conuco – near the waterfront and hotels. It has interesting interior, fine local food, and entertainment. An average bill for two with alcohol is around $50.

Mesón de la Cava – a restaurant right in the cave, located in the new part of the city. It looks absolutely unique, features a famous chef, and the bill for two starts at 150 dollars.

Pat’e Palo is located in the historic center and is recommended by all guides for its delicious food. The service is great, but there are many annoying street musicians who create a terrible cacophony.

Public transport is a strange minibus with hanging people from the open doors. I was a bit cautious, although one “snapper” invited me for a ride. I did not agree.

There is an Uber with an average trip going for 2-3 dollars. The drivers feed you candy. Moreover, they are the first country to introduce Uber motorcycle. Because of crazy traffic jams, such service is quite popular. Helmets and vests are issued for a trip, so it looks quite safe, but I wasn’t brave enough to try it.

You can rent a car. There are all international companies, but it is worth it. Wikitravel writes: “people drive fast and furious, breaking every imaginable rule.” Gas is expensive here, so a private driver looks like the best option. In private messages, I can share contact of the great English speaking driver Alberto.

The Dominican is known first and foremost for its beach vacations in Punta Cana. However, we are not like everyone, so we decided to inspect whether there is something more and went to the southern part of the island. There are a number of towns with hotels – Boca Chica, Juan Dolio, district of La Romana, with beautiful beaches according to guides books. Not all travel guides, as it turned out, write the truth. But it is hard to expect someone who wants to attract tourists to write about the mountains of garbage in the cities, which became like ghost towns. They were huge cluttered abandoned territories of unfinished resorts. Prices for functioning resort located directly on the shore start with $300 a night if you are lucky, but can be more expensive. Cheaper options include walking to the beach through garbage cans and paying for the actual beach.

You can order excursions, all cost $60 per person.

Do not do it as we do, and if you want to be in the trend and visit this island, then follow the tradition and go to Punta Cana.  Even better – go to Puerto Rico – everything will be much better with the same Caribbean Sea.