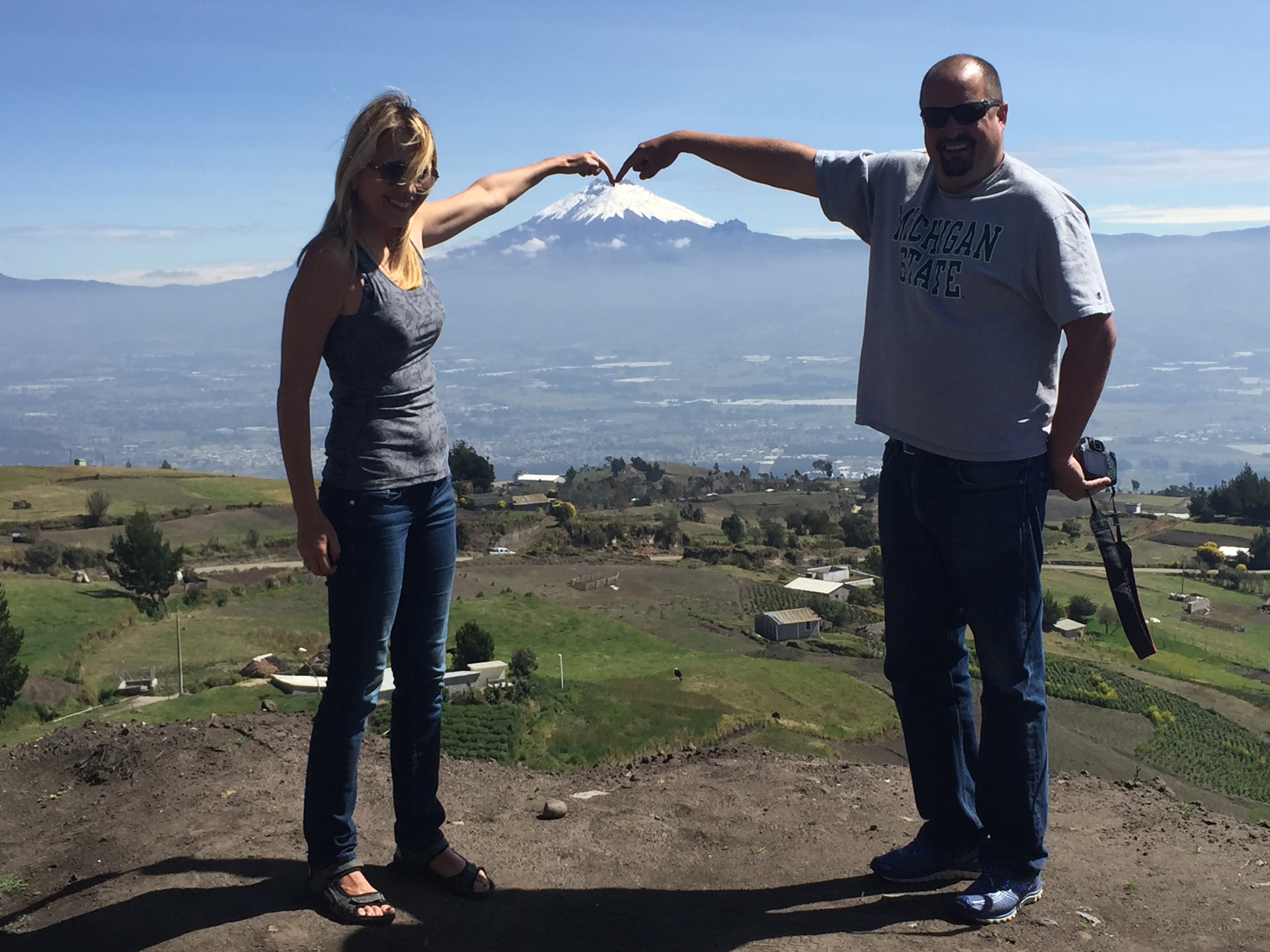 Of all countries in Latin America, I would like to return to Ecuador the most. Its exotic nature, unique culture, numerous historic sights, a developed tourist industry, and most importantly – people, keep pulling me back. I was treated like a relative paying a visit rather than a tourist. In addition to high-quality service, Ecuadorians love expressing passion for their homeland with others. At first, we thought were just getting lucky with hotels and guides. However, almost every cab driver who spoke English told us about every plant we drove past, asked us about destinations we saw and gave us recommendations for new ones.

It’s safe and clean. City’s cleanness is fascinating. We arrived in the capital on the Day of Quito, a local holiday celebrating the city. I have never seen a huge crowd of people which did not leave any trash behind! Even in poor villages, it is still very clean. Ecuadorians say it took them a while to learn but they are proud of the result.

The Ecuadorian culture is rooted in local traditions but has been influenced by the Incas and Spaniards. Despite being part of Inca empire, they do not associate themselves with Incas and have unique culture and history of their own. According to their version of history, every attempted conquest by the Incas failed, and they only became part of the empire for a very short time and only due to marriage between kings’ children. This view of events differs greatly from Peruvians, who have phantom pains for the lost empire (this reminds me others of the same kind). This tension simmered as an armed conflict between Peru and Ecuador until 1995.

Similarly, the Spanish influence is minimum because of one simple fact – geography.  In many Latin American countries, the conquerors were able to rewrite history by killing off most of the population. Ecuador’s rugged volcanic mountains served as a place to hide for some and for others, their villages were so remote that the Spanish never made it there allowing the locals to preserve their culture, language, customs, architecture, and passion for their home. Catholicism is the most notable reminder of what the Spanish left on this territory, but in keeping with Ecuadorian nature, a lot of locals intertwine old Pagan rituals into their spirituality and daily lives.

Visa. Not needed for citizens of most countries.

Quito is the capital of Ecuador, and it is the second highest capital (after La Paz) in the world. Quito is situated by a sleeping volcano, at an altitude of 2800 m (9350 ft). City’s length is 60 km (40 miles) and is divided into three parts: old town, new town, and La Mariscal.

Old town Quito is the largest historic site in Americas. In 1978, the district became one of the first to get on the list of UNESCO World Heritage Sites. There are around 40 churches, 16 monasteries, 17 piazzas, President’s Palace, and bunch of museums, theaters, and restaurants with magnificent view. Opposite side of the city is new town, a neighborhood with modern skyscrapers, parks, and the majority of famous hotels. The third is La Mariscal which has its unique style with an art district and vibrant nightlife.

There is a great variety of living options from 5-star hotels to inexpensive hostels. You can choose between living in comfortable hotels in new town or be in more rustic settings but closer to historic area in old town or be in the noisy but vibrant neighborhood of La Mariscal. Whatever you choose, it is fast and cheap to get from one part of the city to another.

I recommend taxi. In fact, everybody recommends taxi. It is because you can get to the opposite side of the city for $5-7, and from the airport to the new town only for $20. Public transportation is great too but I have not tried it since taxi was so cheap. The majority of cab drivers do not speak English but they know the city very well and will give you a fair price because they really want you to enjoy your trip.

I would not recommend renting a car despite the fact that Ecuador has good roads. There are very narrow steep streets, and most cars have stick shift. Furthermore, drivers are very aggressive even compared to Kyiv or New-York. It appears that driver’s main communication tool is a horn, and their sounds form a language of their own. If you do not “speak” this language, you can get into a confusing situation.

I like to start exploring cities with Hop-on-Hop-off tours. It’s a great opportunity to get a general gist of the city with a great deal of freedom. There is a wonderful Hop-on-Hop-off network in Quito with marked spots and convenient schedule. The route goes across old and new town and takes about 2.5 hours. But your first trip should take a whole day.

Walking tour around old town.  There is a wonderful free walking tour. It includes not just architectural sights but also visits to local markets and instructions on how to eat local fruits and vegetables (trust me, special instructions are needed). It takes around a couple of hours depending on the group and participants’ wishes –  which the guides always fulfill.

Teleferico. It is a gondola lift to the top of the volcano by Quito. It costs $10. The number of visitors vary with the season. Luckily, I did not have to wait in line. On top you can go hiking and horseback riding for fascinating views of active volcanos. Also, there is a volcanic park for children. It is easiest to get there by cab (around $5 from any point in the city).

Night life. You must visit neighborhood of La Mariscal. Here, life begins at 7 pm. There are bars and clubs of all sizes, musical genres, and each has its own unique design (it is interesting how there is no cacophony in a place like this). It is perfect to start with a dinner and then go bar hopping. You will definitely have wonderful time.

I would also recommend taking one-day tours out of the city. Generally, these tours cost around $50 including transport and lunch and will add to your unbelievable memories of Ecuador. Here is a list of some of them.

Mindo Rainforest – it is a national park with the greatest variety of birds –  almost every single species that lives in Ecuador. There is also a very interesting rope gondola, exotic nature, and waterfalls. The tour includes a very inexpensive trip to a butterfly farm, chocolate farm, and zip lining.

Middle of the World Monument (La Mitad del Mundo) – it is the line of equator. There are a monument and a museum with all kinds of experiments. To be honest, there isn’t really anything interesting. I would recommend to just stop at equator in Cayambe on your way to Otavalo Marketplace (you will be actually surprised – equator line is literally in many places and constantly changes).

Cayambe – it is a huge renovated sun clock and a calendar. Interestingly, ancient Ecuadorian villages formed a huge clock/calendar with Quito in the middle.

Otavalo Marketplace – it is a massive local market which works only on Saturdays. You can haggle and buy alpaca cloth, ponchos, and national clothing. It’s very eye popping and vibrant. The tour ends in Cotacachi – beautiful lake in the volcano crater.

Volcanos – are an essential part of Quito. There are around 80 volcanos of which 24 are active, such as Cotopaxi. Ecuadorians still follow old rituals of worshiping volcanos.  They see them as an embodiment of great powers.

There are lots of tours to volcanoes: Avenue of Volcanoes, Cotopaxi National Park, Cotopaxi Volcano. We took a tour to Quilotoa Lagoon. We drove along “the volcano alley” seeing countless volcanoes and stopping to gaze at the breathing one – Cotopaxi. We then ventured to a volcano crater the Quilotoa Lagoon which now beckons visitors to hike down to it and enjoy kayaking before climbing onto a donkey and ascending up to the local markets. The tour continues to impress by overlooking a magnificent canyon, and ending in a small village, where people live as if industrial revolution never happened.

Termas de Papallacta Spa – it is exotic and enjoyable thermal spa in a volcano crater near the origins of the Amazon river.

There are also rafting and jungle tours available. If you go to Jungle go at least for couple days.

Most tours will be much more interesting than the description says. We weren’t disappointed after any of the tours so order any one.

Ordering a tour is really easy from the Internet here  http://communityadventures-ec.com/

There is information about tours almost everywhere: cab drivers, hotels, hostels, and Hop-on-Hop-off ticket locations. You can save $10-15 by buying these tours on the spot instead of ordering on Viator. Don’t hesitate to ask about individual guides. They often have individual tours that cost the same as if you went with a group. All tours have comfortable transportation as well as humorous and knowledgeable guides who would satisfy any wish. In the Mindo Rainforest, I saw a sign that said waterfalls and after the rest of the group agreed to go there we changed our rout.

Ecuadorian cuisine is very tasty, portions are huge no matter the type or class of restaurant. Everything is fresh and delicious. Your least expensive option is obviously local restaurants where you can buy lunch for 2 dollars. A lot of locals and tourists go to central market for lunch because of its vibrant atmosphere, affordability, and quality. Most meals look unusual, and I could not memorize all their names but any food is safe and tasty. Similarly, to Ukrainians, Ecuadorians love food and their cuisine features freshly picked vegetables and fruits. They will gladly tell you about their food and let you taste it.

In general, the food scene is well developed with a great variety of restaurants. I would recommend a restaurant, Pim’s Panecillo (on the mountain by the city center) or in old town Vista Hermosa that has a great view of the city.

In my opinion, there are a lot of similarities between Ukraine and Ecuador: attachment to their land, obsession with potatoes, old traditions combined with awareness of world news, love for high-tech, hospitality, and even frequent revolutions with changing presidents. Ecuadorians still try to fix their country. Everybody kept telling me that change needs to happen within people first before the economy can improve. Seeing them working on changes makes me confident that they will succeed.