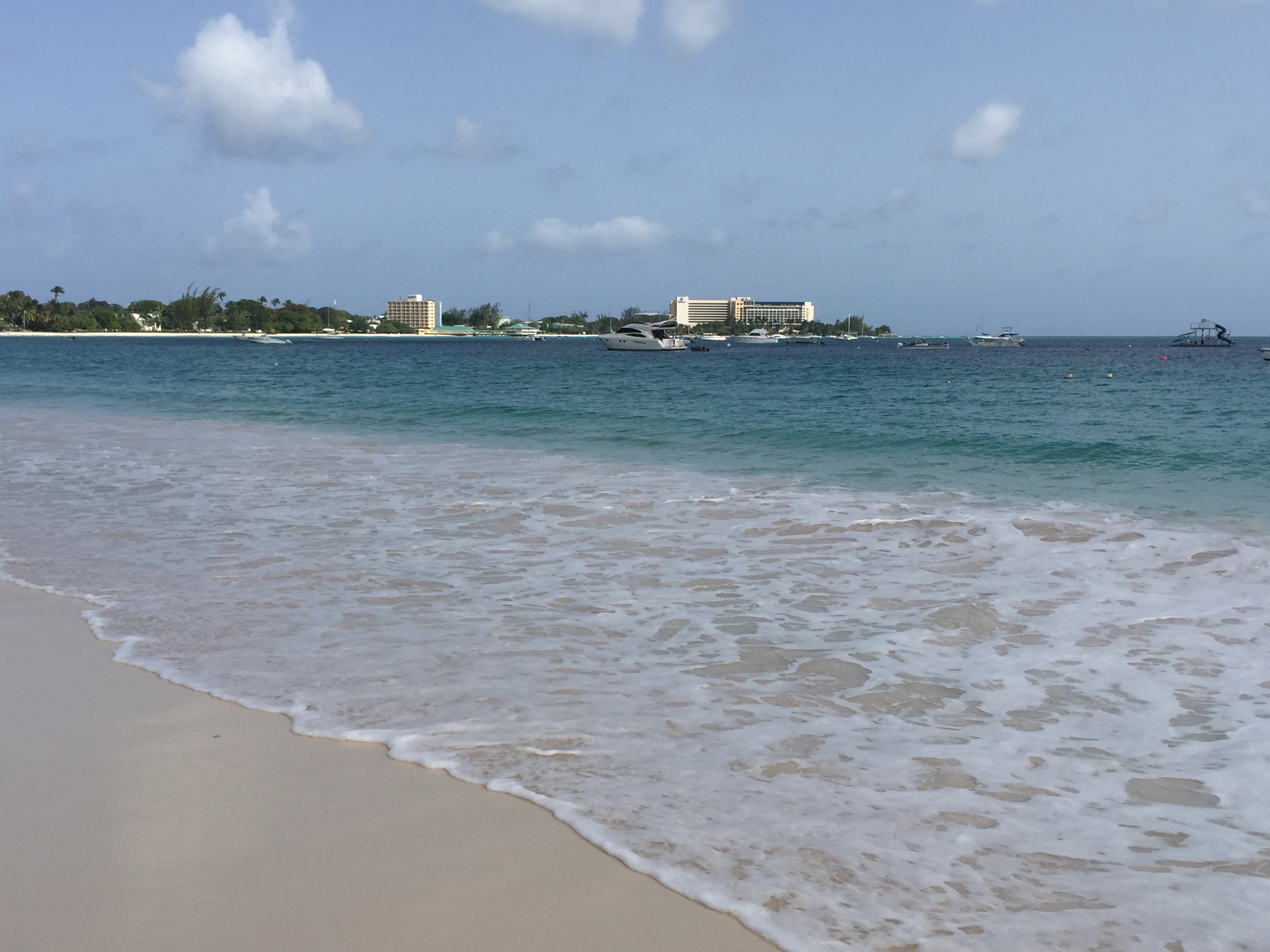 Barbados is a natural paradise in the Caribbean. The only non-volcanic island among the archipelagos, it’s a place where the Caribbean Sea meets the Atlantic Ocean. While all the other neighboring islands suffer from natural disasters, Barbados claims to have lack of hurricanes, a very mild rainy season, lovely summer-like temperatures year around and crystal-clear seas.

The island is the largest in the archipelago, however it is only 34 kilometers (21 miles) long and 23 km (14 mi) wide. In spite of such a small land area, in the past, the island was a serious competitor to Brazil’s sugar cane industry. It is also considered to be the birthplace of Rum (and pirates of course).

There is almost no crime. It is one of the few remaining places in the world where people still leave their houses and cars unlocked and police’s main job is reporting traffic accidents.

Everything is neat and clean.

Tourist’s peak season is from October to April. We went there in June which is considered a low season, and our trip was pleasant and relatively inexpensive.

Not needed for citizens of most countries. For Albanians, Romanians, Ukrainians and few other nationalities, there is an additional security check. I spent 30 minutes waiting in the special room for the results and playing game with my husband 🙂

Customs in Barbados is almost as crowded as in the US. But the upper scale hotels, in addition to transfer give you an advantage of going through priority line.

Most airfares are pretty expensive.

On the island itself the means of transportation are limited to taxi or car rental.

You can take a taxi for about $20-30 from one side of the island to another. The problem is to find a taxi anywhere but at the airport.

Everybody else would have to rent a car. It is the best to do it through the Internet because prices can differ significantly once you come to Barbados. We rented a car from Hertz for $230 a week. On the spot, it would be at least $490 a week.

It is a little hard to drive: left-hand traffic, nobody uses turn signals, only one big highway, and all the other “highways” look like this:

There is a majority of the well-known hotel chains present on the island. They are mostly located by the water and have their own beaches. The least expensive hotel room starts with $150 in low season to $200 in the high season. Many people rent private living spaces and stay for a month or more in the villas or apartments. So welcome to Airbnb

Firstly, it is definitely beaches and water. Barbados has all you need when it comes to water recreation. There are amazing sand beaches, yachting, kayaking, fishing, all kinds of surfing, cruises to other islands and much more. In case you get tired of water, there is also golf, hiking, safari, and sightseeing tours.

Seaside hotel guests have access to the beach. Everyone else can enjoy technically free beaches of the island because you will have to pay one way or another: some will require you to rent a beach lounger (starting $10 per person), some will make you spend $20 on food and drinks. A great place is The Boatyards where a daily package is sold for $25 consisting of the access to the beach, food vouchers, a lounger, rope jumping, and boat trips to see turtles when the weather is good.

There are some places where you can come and sit with a blanket like Crane Beach. The beach is ranked as top 10 most beautiful beaches in the world, and it has unique sand of pink color. Unfortunately, we did not get a chance to see the sand because the beach was covered in seaweeds.

Snorkeling costs $40 per person including a mask and flippers. Most snorkeling and diving tours go to Browns Beach where five sunken ships have become home for a lot of colorful fish. I would recommend taking a tour first and then going solo from the beach. There is also a coral reef but it is considered dangerous. Another fascinating area, located by the shipwrecks, is where you will find turtles that local guides have learned to lure in with food for tourist’s entertainment.

One of the best snorkeling agencies is Barbados Blue. Its office is located by the Hilton hotel. They also have diving courses for $450 per training level. More information can be found here: https://www.divebarbadosblue.com/

Another popular entertainment is cruising on the giant catamarans: 2 hours, $70 per person includes snorkeling, feeding fish from the boat, and some snacks. I would highly recommend the night tour for seeing the sunset. One of the best agencies is Tiami http://tiamicatamarancruises.com/

One of the unique experiences is a submarine tour around the island. Submarine tours like this exist only  in two places in the world: Barbados and Egypt. There are night and day tours. You can also rent a submarine just for yourself with a dinner onboard. Anything you want for your money. The tour starts at $95 per person. By the way, the submarine passes the coral reef.

You can order it here http://barbados.atlantissubmarines.com/

Barbados is a mecca for watersports with a unique twist. Owners of water transport (usually small ones) use a very interesting marketing technique: they approach you on their boat or jet ski while you are swimming and offer ride or parasailing. By the way, jet ski costs $60 for 30 minutes.

There is also some sightseeing to do but surely the island is not the hub for historic sights. You can order a day tour here: http://www.williamstoursbarbados.com/  For 6 hours and $75, tour guides will share everything and transport you to any location including many interesting local settlements.

Local architecture is very unique. Houses are constructed using blocks that can be easily disassembled. Quite often a big house is made by connecting a few small ones. This style developed when slavery was abolished and former enslaved were granted right for houses but not land. Therefore, land owner could ask a person to leave at any time so houses had to be easy transportable.

Bridgetown is the country’s capital. It’s a small town with some remnants of colonial architecture. The center of the city is listed as the UNESCO World Heritage Site. It is pretty interesting to walk around. There is a museum of the city, a racetrack, a synagogue, some churches, and a house of George Washington where you can order “a dinner with Washington”.

Another sight is Animal Flower Cave – a small cave by the sea where some scenes of “Pirates of the Caribbean” were shot. It is not that interesting but there is a lake inside where you could swim. The entrance fee is $10.

A much bigger cave is Harrison Cave which is a real tourist’s entertainment. Inside, you will find a movie about Barbados’ history and a trip through the cave on a special train. It costs $30.

St. Nicholas Abbey – is a Jacobean mansion (English architectural style) which has been one of the biggest sugar plantations of rum production (a bottle goes for $200). Now, it is a private property open for tours. There is an old 17th-century mansion, a museum, a factory where you can see how rum is made, a garden, and a restaurant on the terrace. It is captivating. Entrance fee is $45.

Barbados has stunning nature. According to scientists, the number of plant species here is greater than in the whole Europe. There are several botanic gardens most of which used to be plantations. There are also well kept and restored remnants of old houses open for tourists. They are extraordinarily charming. Flower Forest, Andromeda botanic garden, Welchman Hall Gully, Hunte’s Garden. Cost is $15 per person. Besides taking a walk in the garden, you can order a romantic dinner in the old house or celebrate your wedding here, etc.

Wildlife Reserve – is a park interesting not just for plants but for animals too. You could call it a zoo where animals walk around anywhere they want, including among visitors. The cost is $12.

Tasty and expensive. Pizza is $20, a bottle of champagne is $120, dinner for two in a good restaurant is $150 (without champagne). Of course, seafood is in abundance. In addition to widespread lobsters and shrimps, you can order something pretty unique, for example a parrotfish and a flying fish. A popular drink is rum-punch.

The south coast is filled with restaurants and bars by the water. You can choose anything as: Shark-1, or Shark-2, or Shark-3 or worst comes to worst Castaways 🙂

You can stop for a drink and watch the sunset at many restaurants right by the water on the west coast. My favorite was Drift Ocean Terrace Lounge http://www.driftinbarbados.com/

I would highly recommend trying street food fish sandwiches at Cuz’s Fish Stand right by the Radisson hotel in Bridgetown. The owner catches fish in the morning to make amazing sandwiches. Nothing but fresh bread and fresh fish. When morning catch is over, the stand closes. A price for this gastronomical miracle is only $5.

In a nutshell, this land of pirates and rum with amazing singing frogs will be happy to welcome you.