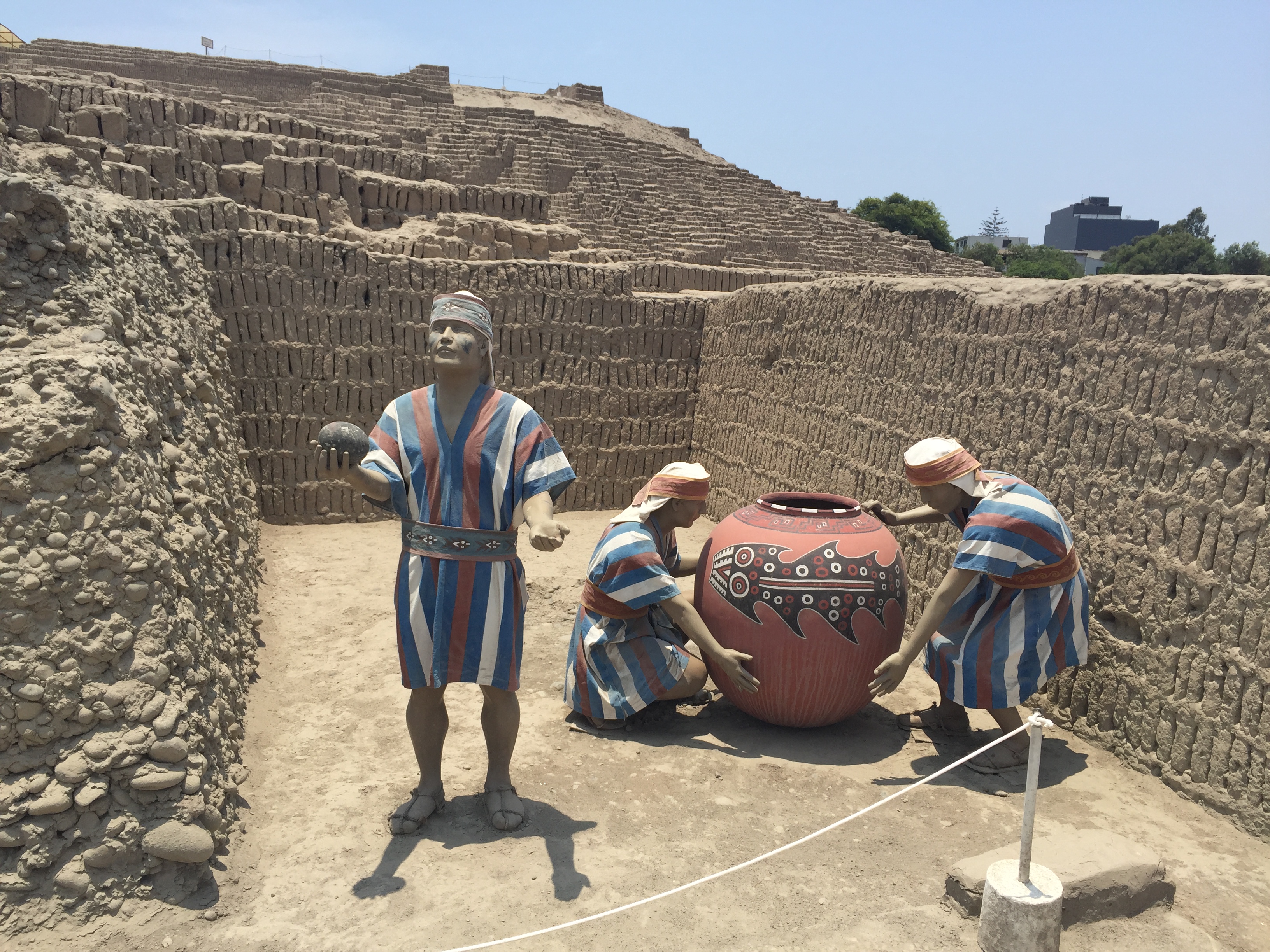 The general opinion about Lima is that it is not a touristic destination, but I find it to be unfair. The capital of Peru is enormous with 11 million people living in the city. It is a mix of ancient history with monuments dating back to the AD, colonial culture and modernity.

Peru is associated primarily with the civilization of the Incas, but this civilization existed a rather short historical time – just over 100 years (15th-16th centuries). The first people appeared on this territory more than 11,000 years ago. Consequently, the Incas largely used what was developed by other cultures before them, improved on some things, and, progressed. Since there were no written sources about people who lived on the territory of modern Peru, there is mostly Spaniards description, who colonized the country in 17th century. They did not know anyone but Incas, and just described them without any interest in the history. Thus, there appeared an association of Incas and Peru, but not with the culture of nazca for example.

Interestingly, the Incas is not a nation, but rather a religion. Anyone could be considered Incas as long as they followed three simple rules: do not steal, do not lie, do not be lazy.

It is even more interesting that the government actually controls only part of the territory officially owned by Peru. Most of the country is a jungle where wild tribes live, some of them are still cannibals. Somewhere in the jungle, there are remnants of terrorists, which was once a big problem. Maybe that’s why police have super-armored cars, but now the country is very safe.

You can exchange money in a hotel, for example. However, keep in mind that there may be limitations to how much you can change such as $50 a day. Another way is people in jackets, like road service, with the words “currency” in the city center.  There are many of them and they are official.

Lima has a fairly large international airport. The airport is not the most comfortable in the world. It sometimes has strange things: for example, toilet paper containers locked in an iron cage (is that tourists do not steal and take it home?). There is a weird ground floor designed as an open space where the registration and exit to the customs are separated by a police line, which means you have to go from the registration to the escalator around the street. It was also first time seeing police at each door. Otherwise, the airport is quite normal.

The city is divided into several districts: the historic center, the touristic Miraflores, the luxurious San Isidoro, the artistic Baronco. Interestingly, the head of the district has the authority and responsibility of the mayor. For example, the head of Miraflores regularly allocates funds to support historical reserves, because they belong to the area of ​​responsibility of the district, but not the country or even city.

Most tourists choose Miraflores for accommodations, but I like the more comfortable and modern San Isidro. The historic center is equally far from both districts, but Miraflores is overcrowded and pricy for its quality.

Where I definitely do not recommend to stay is Baronco, because it is a hard to get anywhere from there and housing is pretty bad.

Uber works in Lima and it’s great. Cars, to be honest, aren’t the best and most of them do not have air conditioning. This is uncomfortable because Lima is the second driest city in the world after the Egyptian Cairo (3 cm per year). It is quite hot and windless here. However, the price for Uber is lower than a taxi. For example, a taxi from the airport to San Isidoro costs $20, but Uber is 13. Wait time for a taxi can be a little long. This huge city is not very adapted to the amount of transport there, so there are traffic jams the whole day. It is normal for the app to show you that the car will arrive in 7 minutes for 10 minutes. If the driver was moving, then obviously he/she would have been there in 7 minutes, but he/she is probably stuck in traffic.

Locals are very proud of their public transport. For some reason, buses are called metro, perhaps, because they are huge and often have a separate lane. However, the lines are very long, so I’ve decided to not experiment even of curiosity.

They offer a lot of different tours, including around the city, consisting of a tour by bus (depending on the number of people it can be a minibus, or a large bus), a walking tour of the historic center, and visits to several museums accompanied by a guide. It was also very convenient that they pick you up from your hotel.

In general, Peruvians offer tours everywhere, even in museums. However, you can often get there by yourself for much cheaper. You will not miss out on anything, because inside you can move only accompanied by a different guide and a group.

Huaca Pucllana – a huge territory made up of a ritual pyramids and remnants of service premises where the food was cooked, bricks were made to build pyramids etc. It is a small part of the ritual complex from prehistoric period, which is not fully studied. Archaeologists work in part of the territory to this day. It is an extremely interesting and unique place. The entry fee is $6, which includes guided group tour.

Miraflores area, with its coastal zone, which transforms into a park area.

If you have time to visit Baranco, it is considered to be an artistic district. In fact, it hour away for only one and a half streets, so decide if visiting this worth the ride for yourself.

Real Felipe Fortress is a fort from Spanish occupation, which is still used as a military base. Therefore, it is possible to walk only accompanied by a guide, who by the way can speak Ukrainian. Spaniards used a fort to defend from pirates who regularly tried robbing the gold and silver Spaniards sent to Spain. You can now visit labyrinths which were built to defend from pirates by making them lost. Since the fort is outside of the city, I was curious that the road lied through the local ghetto. It is quite exotic, but you can only see it from the car because it is dangerous.

Parque de la Reserva is a park of fountains. It is a huge area with ​​various fountains, each with its own symbol. There is a fountain symbolizing the continuity of life, the magic fountain, a fountain-surprise, where the water flow suddenly increases little by little. Children and adults really like to get wet in the latter one. Everything has a story. The territory is enormous. Every half-hour begins a 15-minute water show: a film on the screen from fountains. Visit it in the evening. The entrance costs $1.5, and of the tour will cost $15.

Lima has the largest Chinese community in Latin America, so there is China town in the city.

Lima has many museums, but I would especially recommend Museum Oro – collection of incredible ancient produce from gold. Entrance $11 and Larco (entrance $10) – the history and culture of the Peruvians. It is very interesting, and it contains a whole level dedicated to the Peruvian “Kama Sutra” – a huge collection of clay products with all possible sex scenes.

From Lima you can order a lot of interesting day trips. The most famous but not all of them are:

Nazca Lines – hundreds of gigantic image of birds, spiders, fish, that can only be seen from a plane or helicopter in the Sancourt Desert. The figures are laid out with stones, and believed to have been created by Nazca culture between 200 BC and 700 BC. However, no one can understand how they made it, so it is widely believed that alien civilizations created it. At most agencies, tour costs around $450, but it is $270, twice as cheap, from local companies.

Caral – is considered to be the oldest known city in America and the most well-studied settlement of the North-Chico civilization. It cost from $250

Palomino Islands – an island near Lima, a home for sea lions with whom you can swim.

You can book your tours here: http://www.limavision.com/

Alternatively, in the historic center, there will many tour bargains for good price.

Honestly, food is not the best in the world. I recommend watching reviews on yelp and TripAdvisor, although it does not always save you. We went twice to highly recommended places that I would not recommend to anyone. Instead, we found a place where food is an artistic masterpiece, and the presentation is a show. I would highly recommend Astrid y Gaston in the area of ​​San Isidro. It is quite expensive with dinner for two starting at $100, but it is definitely worth a visit. It was one of the most delicious meals of my life.

The average dinner bill for two will be around $40. We didn’t try street food because it seemed not safe, but maybe you will be more brave.

The highlight of Peruvian cuisine is, of course, guinea pigs. They are cooked everywhere: in expensive restaurants and as a street food. It is a little bit scary, but really delicious.

Another feature of Peruvian cuisine is Coca. Coca is a plant from which it is possible to make cocaine. However, one needs to recycle tons of that coca, but the cultivation and export is limited. The world found out about coca from Coca-Cola which contains coca extract. In Peru coca is everywhere: coca candies, Cocoa chocolate, coca tea. There is coca in all possible variations. It is sold in supermarkets and outdoors. I must say that coca for Peruvians have been a ritual plant. They attribute therapeutic properties such as treating headaches and improves vitality. I could not resist to load half of my baggage with coca in many forms. I was very worried for it to be found at the customs, but thank God, everything went good. so my family now has increased vitality.